Metallica is a North American metal band formed in Los Angeles by drummer Lars Ulrich and lead singer James Hetfield. One of the exponents of the Bay Area scene in San Francisco known for the thrash metal and main name of the "Big Four", given the four biggest bands that emerged from there, along with Megadeth, Slayer and Antrhax. Currently the band has in addition to the founding members and key composers, Guitarist Kirk Hammet and bassist Robert Trujillo.

Although one of the forerunners and biggest names in thrash metal worldwide, the band has never been attached to the genre, breaking barriers and innovating in the genre both sound and market, being the first thrash / speed metal band to have an acoustic ballad with “ Fade To Black ”in 1985, drawing mainstream metal attention to the rising group with the album“ Metallica ”, also known as“ Black Album ”, the band revolutionized the style by mixing their heavy sound with hard rock elements and of classic rock, becoming a landmark of the time and even today one of the best selling records in history, influencing many other artists and groups that would emerge in rock and metal!

Metallica's South American tour in April 2020 continues the WorldWired Tour, which has performed more than 150 shows worldwide since early October 2016. 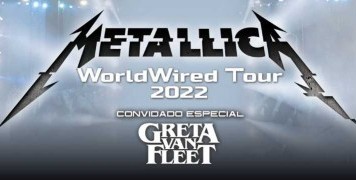